I started this site because, guess what, I enjoy running…

I’m nothing special, not particularly quick, and I’m constantly nursing dodgy achilles; but that doesn’t stop me going out and plodding around the local streets.

Despite my advancing years and a body that is starting to fall apart at the seams, I do try to get out at least 3 or 4 times a week.

I might not be a Mo Farah, and my peak years are a long way behind me (not that my peak was ever of Everest proportions you understand), but it doesn’t stop me hanging on to the hope that I can run quicker, or further (or in an ideal world both of these things!).

And I think most of us who like running/jogging can relate to this almost masochistic streak that constantly pushes us to run just that little bit quicker or or that little bit further.

A Little Bit of History

To be honest, running has not always been my primary ‘thing’.

Going back to the dark ages when I was still at school, I would guess you could have (kindly) described me as non-athletic.

As an asthmatic, I used it as a way to get out of games, not realising what I was missing out on.

Consequently I was, shall we say, ‘under tall for my weight‘!

In other words the ‘tubby little asthmatic’ of the title.

On the rare occasion I was forced to join in on a cross country run, you could always find me near/at the back.

I was the stereotype of the tubby kid bringing up the rear of the run, red faced and gasping for air.

Fastforwarding a few years and once I’d found that playing sports was actually quite good, running was still not my sport of choice.

Back when I had hair and mobile phones were as big as breeze blocks, my exercise of choice was playing football.

Well, I say playing football, it was more running around a lot and kicking people.

It is fair to say I had more enthusiasm than ability, which you could say still applies with my running 🙂

However I started my running to keep fit for the football.

I would go out once or at a push twice week. Cheap running shoes, no GPS watch, and no Strava.

As long as I stretched the legs between football games I was happy.

Yes there were the occasional running based event; ‘Run the World’, anyone remember that? The running offshoot of Band Aid.

Then there was my (to date) only marathon run.

No formal training plan, just a crazy idea floated by a mate who started to come running with me.

We completed the Dublin marathon and celebrated with a Guiness or two.

However, those days were mostly about keeping fit for football.

Skip another two or three decades in my timeline and my body (and my wife!) finally told me, in no uncertain terms, that I was just too old to play football any more.

A game of 5-a-side football on a Friday, with all it’s twisting and turning, stopping and starting, left me hobbling into the start of the next week.

So with nothing now in the way, I decided to take my running slightly more seriously.

…although it has to be said that there is still a fair amount of nursing, stretching and icing required to ensure I can keep getting out there.

So through to the current day, and I will do my best to go out running at least three times a week, with some cross training static-bike riding for two or three of the other days.

I do try to get to as many local Parkruns as I can and I have even had the honour of guiding a blind runner around on a couple of occasions.

To date my PB is under 21 minutes, OK, only by one second under, but I’m taking it.

That was some time ago now, so will I ever beat it?

Who knows, but I’ll never stop trying to 🙂

Suffice to say, I’ve come along way since those porky, breathless days at school.

I’m still the short asthmatic of the title, but these days, not so tubby 🙂

What Helped My Running

At this point I should give ‘a shout out’ to a couple of running books that I have found really helped me, both keep running, and attempt to run further and quicker.

The first is one I go back to again and again and is called 80/20 Running by Matt Fitzgerald.

The overriding message from the book is that most of us competitive ‘fun’ runners, do far too much running at too high an intensity.

Hands up to this one; guilty as charged!

I couldn’t see the point in going out if I wasn’t trying to go quicker or further on EVERY run I did.

Basically the message is to run easier to run more.

In fact the most difficult part of following his advice is to go slow enough when it is not one of your high intensity runs!

It might just be me, but running easy seems to be somehow cheating. Yes, I know, I’m not always the sharpest tool in the shed.

Obviously there is a lot more to it that that, and this book covers all the bases…

…from giving you the facts behind the concept, right through how YOU can apply the information to your running.

Here’s what one other runner thought of the book and what he took from it.

It also contains a number of 80/20 running plans for all levels of runner from 5k up to marathon.

It also covers what you can do to increase the amount of training you do, even if, like me, your body is falling to bits.

The book and its methods are what I credit for me being around two years without injury (prior to reading it, you could more or less guarantee I would pick up a niggle every few months or so)

As I say, I love it and if you like the idea of getting better by not killing yourself every time you go out for a run, this is an ideal book to get your hands on.

Just a reminder, if you do purchase via the link I have provided, I WILL receive a small commission. It helps pay for hosting etc for the site.

However, that is not why I’m telling you about this book, so if you feel uncomfortable about me receiving a commission, I think enough of this book to tell you to go to the site directly. Just get it, is my advice 🙂

The second book I swear by, is Chi Running.

Strangely enough it is another book that is really focusing on getting away from the idea that you can’t be running right if it is not hurting.

I initially picked it up to try to get away from the regular injuries I picked up and I’m glad I did.

Danny Dreyer, the author of the book (not to be confused with Danny Dyer, the professional cockernee geezer of Eastenders fame), believes that we should be getting away from just using the power of our leg muscles to run.

If I had to sum up the content of the book it would be how running is primarily constant controlled falling.

I know that all sounds a bit cuckoo, but it makes a lot more sense when you read what Danny has to say.

Here’s a short video of Danny demonstrating some of the principles of Chi Running (the audio is not brilliant, but you get the drift).

Whether you want to avoid injury, run more efficiently or just be able to gobble up the miles Chi Running is a book well worth considering. 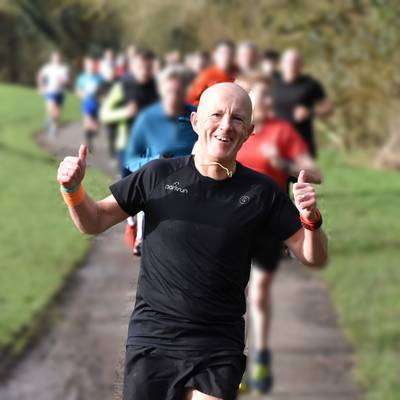